My long-awaited Nomiku arrived just before Thanksgiving.  I did some experiments over the holiday and this weekend I’m going to test it for flank steak.  The purpose is to examine the effect of sous vide time on the cooking of flank steak. Recipes online advocate 16-48 hours, but if less time works, then less advance planning is needed.

I wanted to do these roasted sweet potatoes too, but the recipe calls for an hour at 150°F and I don’t have a second temp controlled bath (yet!).  I figured it couldn’t hurt to go longer at 130°F and see what happens (the amylases are supposed to kick in at 135°F, but we don’t know the shape of the temperature dependence.  Sliced sweet potatoes into ~half-inch slices into the bath at 3:15 PM.  As with the carrots we did at Thanksgiving, the veggies float more than the meat, so it’s being held under by a colander.  I put a little water inside the bag in this case, but it didn’t help the flotation much.

Pulled the sweet potatoes and drained them. Spread them on a rimmed baking sheet with olive oil and rosemary.  Salted with kosher salt and put into a preheated 400°F oven.  After 30 min, flipped them individually and returned to the oven for another 20 minutes.

Pulled the meat at about a bit before 6 (we had an Aggie Women’s game at 7). I ran some cold water over the bags to cool the periphery of the meat. Then I pulled it out, discarded the wilted herbs, and patted it dry with a paper towel.  I seared in a hot cast iron pan with some canola oil, flipping every 30 sec for a total of 2 minutes.

This is what it looked like before and after searing. 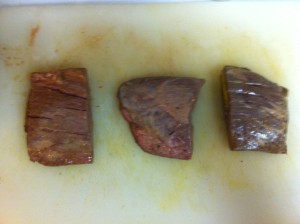 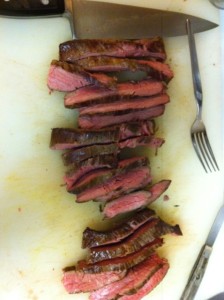 And this is what it looked like after slicing.

We tasted pieces going from the shortest time to the longest. Debby and I agreed that the longer time was noticeably more tender when tasting the three together. However, we both think that, for us, the difference isn’t worth going longer than overnight.  All three portions were very tasty, and even the 9 hour was pretty tender. Also, when we mixed them up on the dinner plate, the differences were not obvious between the 24 and 48 h incubations.

The roasted sweet potatoes were very good, and the caramelization suggested that the incubation had helped. However, I didn’t do controls on the sweet potatoes.  The browning was not as even as I would like; I think a better sheet pan, and/or moving the slices mid-cook might have helped.

I saved cooked the bag juices from the meat and used them to make a tiny risotto snack after the game.