Partly this is because these pictures look so good, and partly because I want to try sealing with liquids in the ThriftyVac. 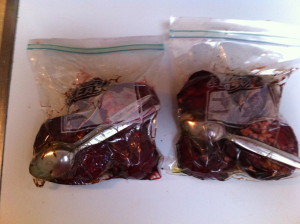 In the left picture, the bag on the left was done by water displacement, while the one on the right was done on the ThriftyVac. The spoons (2 tsp/bag) are to provide weights to make the bags sink. The good news is that doing the ThriftyVac with the liquid present wasn’t that hard. In the pic on the right, the vacuumed bag is on the bottom. The bad news is that there seems to be as much trapped gas, if not more, as in the water displacement bag. After a few minutes in the hot bath, both bags are like portuguese man of war jellyfish – a floating air sac on the surface with the food submerged by the weight of the spoons.

It could be that I need more practice with the ThriftyVac; it’s acting like the only thing that happened was that the bag got flattened by the exterior bag in the same way you would see with the water displacement, and then air got back into the spaces between the irregularly shaped beet chunks.  I also didn’t oil the seal this time, thinking that the liquid in the bag would serve that purpose.

In at ~3:30 PM. Pulled at ~6:20…the beets were flavorful and al dente.  The spoons eventually led the bags to leak, fortunately after the food was out of the bath… with beets I think I would be able to tell if it had leaked in the bath.  I think the idea of weights is good, but I need something less likely to puncture the plastic. Or better bags.

For the protein for dinner, I did sous vide chicken breast (hoping to not kill anyone). 140°F chicken breast is recommended to cook for at least 95 minutes, and can go for up to 10 hours, so I probably should have done the chicken first, chilled it, and then reheated.  Starting with partially frozen chicken, I should go longer.  Turned down the bath to 140 and added some cold water until it got to around 160.  Meanwhile, seasoned a bag of skinless chicken that Debby had taken out of the freezer earlier, put it back in the bag and used water displacement to reseal. The bath was still > 150 °F but the chicken should cool it, I hope.  In at 6:30. Bath reached 140 at 6:40.  The outside surface of the meat looks cooked already, but I suspect the interior is still cold.  Used my thermapen to check at about 6:50… internal temp was about 90°F. So, target 8:30 for dinner, while we watched The Shop Around the Corner.  The chicken was moist, but I think I prefer the white meat from a properly roasted chicken, which isn’t a fair comparison, since I started with boneless chicken breasts, which pretty much define blandness. The sous vide is essentially a way of poaching things in their own juices.

Meanwhile, I’m making roasted potatoes. Cut into chunks. Bring to boil, reduce to simmer in water with salt and vinegar. Tossed with bacon fat mixed with olive oil. Put on a rimmed cookie sheet in a 500 F oven. Cooked for a total of about 45 minutes, turning a couple of times. These came out really well.