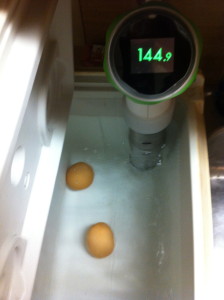 I’ve had the Nomiku for a couple of weeks now.  Last weekend I tried what is supposed to be one of the most difficult tests: soft boiled eggs. I set the Nomiku for 145°C and plopped in some eggs to serve on a stir fry.

I let them go for just about an hour. I probably should have gone a touch longer, as the whites were a tiny bit on the runny side, as expected.  But I was impatient.  I’m wondering if its better to go >90 minutes, or to do 145 for an hour, and then briefly raise the temperature. 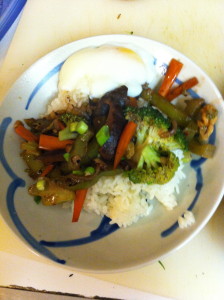 Previously, I used a 12 quart stainless steel stock pot for the bath. Here, I’m using a Coleman cooler we have. This
should be more energy efficient, but I didn’t like the way the lid got in the way.  I  moved the setup closer to the sink too.  Before I remembered

that we had the cooler, I ordered a 12 quart polycarbonate food container, which seems to be a popular vessel in other pics of sous vide circulator setups.

The other component in many sous vide setups is a vacuum sealer. I haven’ t been using one, and the “water displacement method” has worked well for the meats. Vegetables have had problems with floating, but it’s not clear whether that is due to outgassing or just gas trapped in the bags. So when I saw the ThriftyVac, I decided that $26 including shipping from Amazon was worth trying, vs real sealers that cost hundreds. 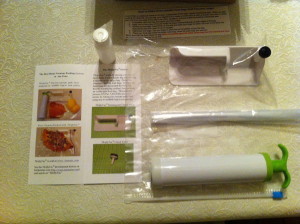 The ThriftyVac came yesterday. As the inventor says very specifically, it’s that cheap because his ability to reuse components that already exist.

It’s a clever design.  There are some critiques of how well it should work, but I think they are irrelevant to my sous vide uses.  I also plan to use it to decrease freezer burn for when we freeze meat*, and I suspect I’ll think of more things to use it for as I have it longer.

*Supermarkets seem to only sell pork chops and chicken parts in amounts suitable for larger families than ours.